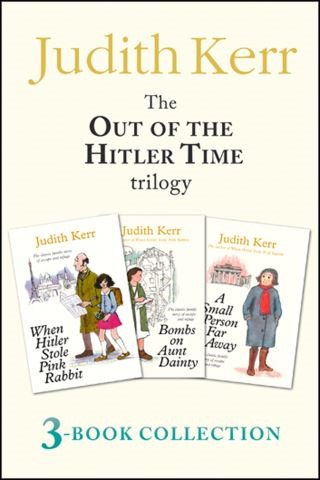 Out of the Hitler Time trilogy: When Hitler Stole Pink Rabbit, Bombs on Aunt Dainty, A Small Person Far Away

An omnibus edition of Judith Kerr’s internationally acclaimed trilogy, When Hitler Stole Pink Rabbit, Bombs on Aunt Dainty and A Small Person Far Away, we see the world through Anna’s eyes as she grows up – from her much loved family to Hitler’s holocaust.Anna was a German child when she had to flee from the Nazis before the War. By the time the bombs began to fall she was a stateless adolescent in London, and after it was all over she became a happily married Englishwoman who thought she had put the past behind her.This omnibus edition of the three volumes of Judith Kerr’s Hitler trilogy, tells her story beginning with the rise of Hitler in 1933 through to her return to Berlin years after the war.

Judith Kerr: Judith Kerr OBE was born in Berlin. Her family left Germany in 1933 to escape the rising Nazi party, and came to England. She studied at the Central School of Art and later worked as a scriptwriter for the BBC. Judith married the celebrated screenwriter Nigel Kneale in 1954. She left the BBC to look after their two children, who inspired her first picture book, The Tiger Who Came to Tea. Published in 1968 and never out of print in the fifty years since, it has become a much-loved classic and perennial bestseller. Judith was awarded the Booktrust Lifetime Achievement Award in 2016, and in 2019 was named Illustrator of the Year at the British Book Awards. Judith died in May 2019 at the age of 95, and her stories continue to entertain and delight generations of children.